Iran and the Death Penalty 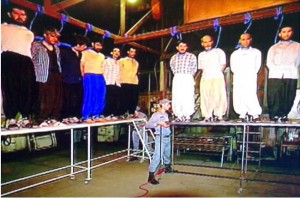 The Iranian government has carried out forty (40) executions in the two weeks since the beginning of 2014, claims human rights group Amnesty International in a statement published Thursday. “The spike in the number of executions carried out so far this month in Iran is alarming,” said Hassiba Hadj Sahraoui, Amnesty International’s Deputy Director for the Middle East and North Africa. “The Iranian authorities must urgently take steps to abolish the death penalty, which has been shown again and again not to have any special deterrent effect on crime.” According to the report, the Iranian government has only official acknowledged twenty-one (21) of the executions with the other nineteen (19) being reported to Amnesty International through “reliable sources”. Most of the executions were for drug-related offenses. The rights group, which unilaterally opposes the death penalty, has called on Iran to reform its policy on capital punishment.

Iran’s harsh death penalty policy and treatment of prisoners has been questioned by human rights groups. In January 2013, UN human rights experts called for Iran to halt the executions of five Ahwazi activists condemned on charges of “enmity against God, corruption on earth and causing propaganda against the government”. The UN General Assembly in November 2012 expressed concern over human rights violations in Iran that include hanging as a method of execution, public executions, and executions of minors. In October 2012 Iran executed ten (10) members of drug smuggling gangs despite pleas by the UN and Amnesty International to stay executions for non-violent crimes. Iran has been accused of “execution binging” as far back as January 2011 when the International Campaign for Human Rights in Iran claimed they were “executing one prisoner every eight hours”.

As a general matter, what do you think about the death penalty as a form of punishment for criminal behavior? Is it an effective form of general deterrence?

What about Iran’s alarming rate of executions? Do you think religion plays a large part of the amount and type of citizens it decides to execute?