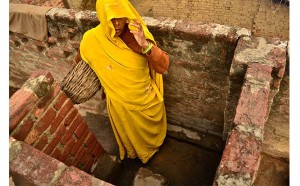 Across India people are cohered into working as “manual scavengers”, collecting human wastes and carrying the waste in cane baskets for disposal; even though the practice is a violation of international human rights. Manual scavengers manually clean, carry, dispose, or handle human excrement from sewers and/or dry latrines.

Usually, woman roles are to clean dry latrines (a.k.a. outside toilets) in homes, and the more physical labor of cleaning sewers and septic tanks are left to the men. According to the 2011 India Census, there are more than 2.6 million dry latrines in the country, and 30% of these are manually cleaned. Human Rights Watch reports that local authorities are normally complicit with the discrimination against the manual scavengers. People who work as manual scavengers usually have no other choice because it is what is expected of the lower caste system. Even former manual scavengers face discrimination in other aspects of their lives, such as housing and employment.

The Indian Constitution bans discrimination based on the caste system, such as untouchability. The Prohibition of Employment as Manual Scavengers and Their Rehabilitation Act of 2013 outlawed all manual excrement cleaning, and recognized a constitutional obligation to provide alternative opportunities to correct the historic injustice. The government has enacted two approaches to eradicate this practice: eliminating insanitary latrines and developing a rehabilitation program for manual scavengers. The 2013 Act prohibits the employment of manual scavengers, prohibits the cleaning of hazardous cleaning of sewers or septic tanks, and violators may face years in prison or a fine.

“I had to work with my head veiled. During the rains, my clothes would become drenched with excrement. They would not dry. The house would smell. I started to get skin diseases and even to lose my hair.”
— Badambai, Neemuch district, Madhya Pradesh, January 2014